I used the zinc plating steel sheet.
In case of attaching with TIG, it melts unless zinc plating is firmly peeled off.
This time it is not the thing of the customers.
It is used in my company.
So, it melted a little as I imagined when I did it roughly.

I was doing roughly, a gap was created between the pipe to be welded and the board.
I filled up the gap with wire.
By the way, rust is not as much as zinc plating, but it gushes.
Therefore, copper plating is applied to the welding rod.
I should weld after rust is removed tightly. This is commonplace.

I used a rusting edge material.
So I thought to paint in POR15 which was famous for paint to be able to paint with from the top of the rust.
But, this paint has too strong adhesion, so it was impossible to open it for the second time and I gave it up.

I decided to paint with used can spray.

The connection of the power supply used the relay box.
I fix it with a screw at the back.

It was completed!
Enhance the grinders’ table and make it tall!
Again, I made thing bigger than I needed.
But I am particular about lightweighting.
As a result, the structure became complicated and the welding distance became long.

The pipe part is made of chromium molybdenum steel.
I bought it to make a roll bar, but used it because I did not use it.
There is still it considerably.

I used the small grinder called “TOGUBEE” of 100V that originally here was since before having begun Araki F machine all the time.
So it was a matter of concern to make the grinder 200 V for many years.
At last it was settled.
The power and fewer blurring exceed far in comparison with 100V it.
It can be very scraped. And it is beautiful.

By the way, it is a majestic figure of TOGUBEE. (Part surrounded by red)
There is no main photograph of the grinder.

So I do the custom of a motorcycle doing in us to have a person reading blog enjoy it.
I think I want to publish useful know-how and data.

Yesterday, as part of that, I published a 3D drawing of a 12 inch wheel on my blog with 3DPDF.
But there was a better way.

There is a site like Youtube of 3D model called Sketchfab.
When uploading to that site I found that I can embed it in a blog rotatable state. 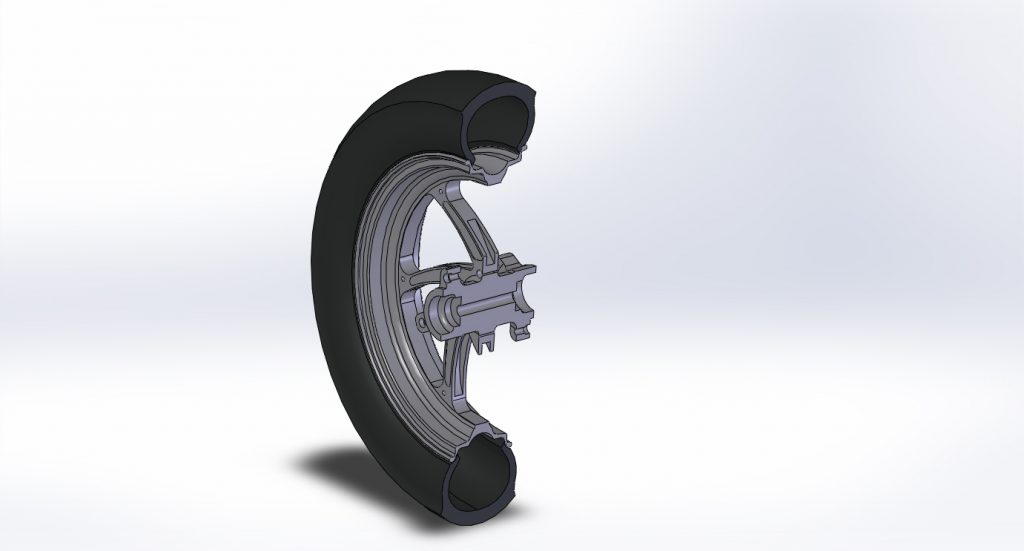 I did not notice until I cut the section, but Mr. Kikawa also draws the thickness of the tire in real.