For now, I was able to SR500 to dry clutch. I was able to run.
I exhibited it to the Osaka Motorcycle Show.
And then, I was riding around remains of steeped of ordinary oil wet disk.
Clutch basket and clutch boss of the dry clutch is made of our Araki  Funkey Machine. This is an additional pyrotechnic of SR400. 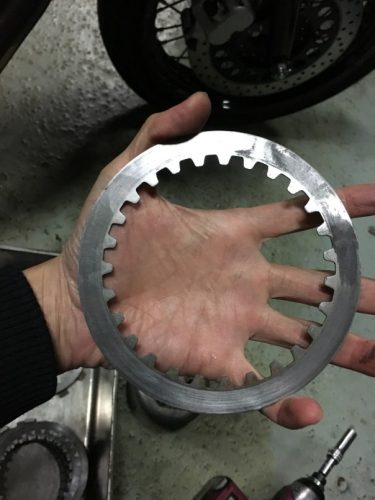 After a while, it began to slide no longer off the clutch of SR500. I saw the clutch plate. It was warped. Distance traveled about 50km.
This is a good data.
This data would not listed also looking for the net.
If you are reading this
“What happens if I use a wet disk dry?”
When asked to someone and,
You are should I replied.
“You are beginning normally can run. But it can not be run only about 50 kilometers. When the running any more, things will get to come to pick a track to your father.” 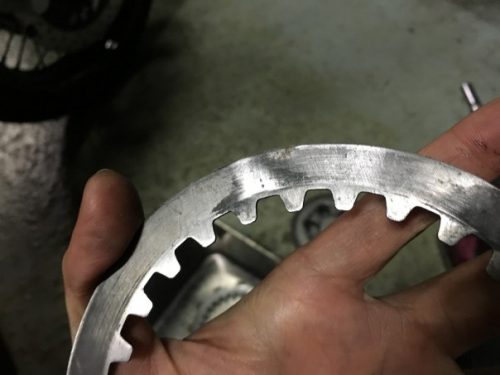 If this is warped, to clutch slip, it should not expired.
By the way, it is called the side of the iron plate only the clutch plate (here ↑).
Then, the side that is put the friction material is called a friction disk.
So, I learned that I needed dry discs.
I tried disassembling the cover of 3XV TZR and looked at the clutch plate. That is what I had in our factory. 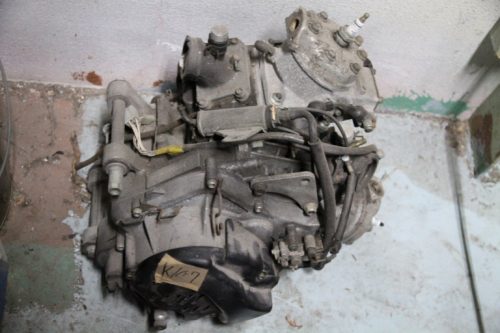 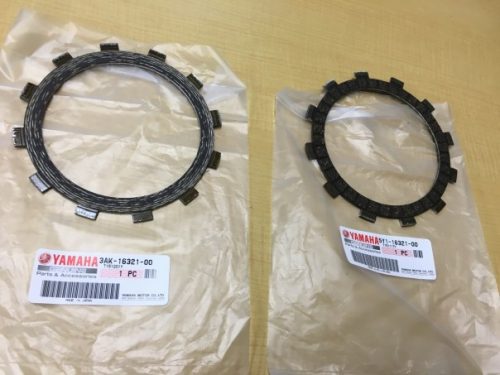 This is good.
At the same time, the clutch plate also for 3MA (3J2-16324-00) I bought. This is also perfect.
here,
I had been hooked a while ago, that there is a law for Yamaha’s genuine part number.
I investigated further using it.
Yamaha uses the first three letters as the model number.
For example, in the case of TZR250 is 3MA and 3XV,
In the case of SR is 2J2 and 2H6 and 3HT,
In the case of TZM50 is 4KJ.

Then, what is 3AK?
It’s TZ250 of the 80s!
Until the latest TZ250,Is the same as the friction plate and this 3MA.
To the very old 3MA of TZR and TZ250 common parts of the clutch, but the fact that 3XV and TZ250 parts does not fit anything.
And, there was further discovered in the clutch of the TZ250. 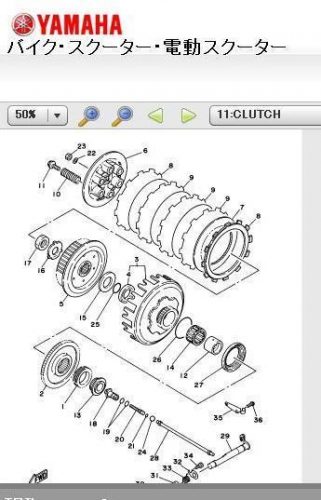 Of the innermost and outermost of the friction plate, part number is different from the other.3YL-16321-01.

I bought it. This.
Maybe,Place in contact with the aluminum is, will the things that use this friction material.
The price is a little cheaper than 3AK-1632-00. 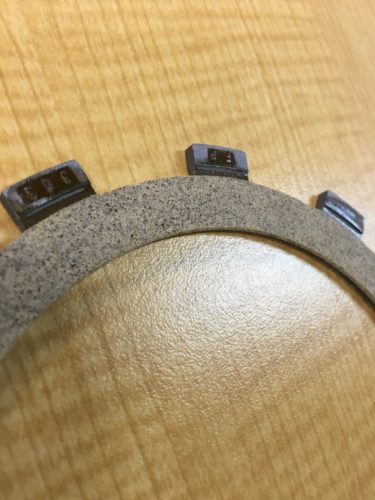 Dry friction disk is different at all wet and material.It is close to the friction material of the brake pads.Glass or Kevlar like a thing or metalic pubic hair like a thing is kneaded.And stench.It smells like Bakelite, or ramen soup.
In contrast, wet disc is made up of something like cork.I tried rubbing the clutch plate and the friction disk under conditions in which there is the oil film.It is, it feels like when chewed the pickles of eggplant. 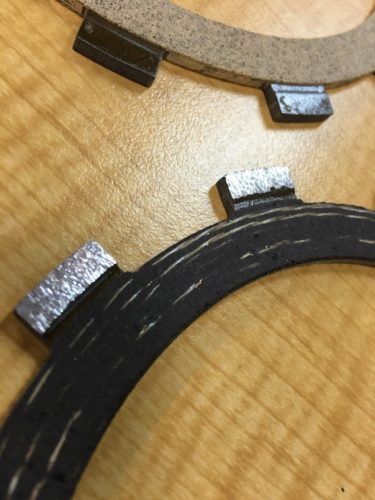 I tried to measure the thickness.This data is the data that I took spend the time and money.But, to publish so I think there is a value.When I compared them, dry  disk is considerably thick.

I was ordered to reduce the number than the disk of normal SR.When you buy a number of disks required,It exceeds 20,000 yen.
For now (March 2016) is, all parts from Yamaha you can get.
If, when the supply of parts’ve finished,looking for a place  to sell the adhesive and the tape of the friction material,It will want to manufacture in my company.
Demand of repapering of the clutch of four-wheel is a certain number.So,to try to negotiate a company that is doing such a business  seems that good.Companies that are delivered to manufacturers, I think is probably rejected.

And I tried teamed up to the vehicle body.It was able to run normally.
Next, let’s ride in this specification.
It is completed if there is no  leakage of failure or oil of the clutch plate relationship with this. 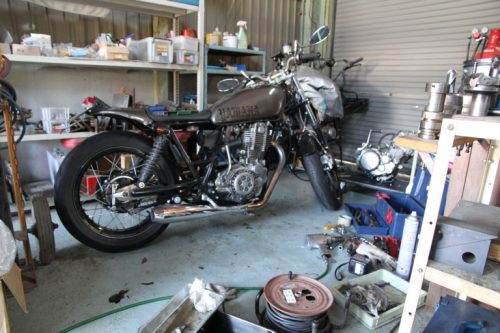 By the way, The friction disc which ran 50 kilometers was reduced by 0.1 – 0.2 mm per one.
As a whole, it has decreased by about 1 mm.That clutch should slip.
I measured the friction disc of the SR 500 that ran many times and it was not decreasing at all.The thickness remains 2.8 mm.This is wonderful.The wet clutch is quite excellent.
Until now I have said that “wet clutch is mixed with engine oil and clutch waste”.But,This is not mixed at all.It has not decreased.